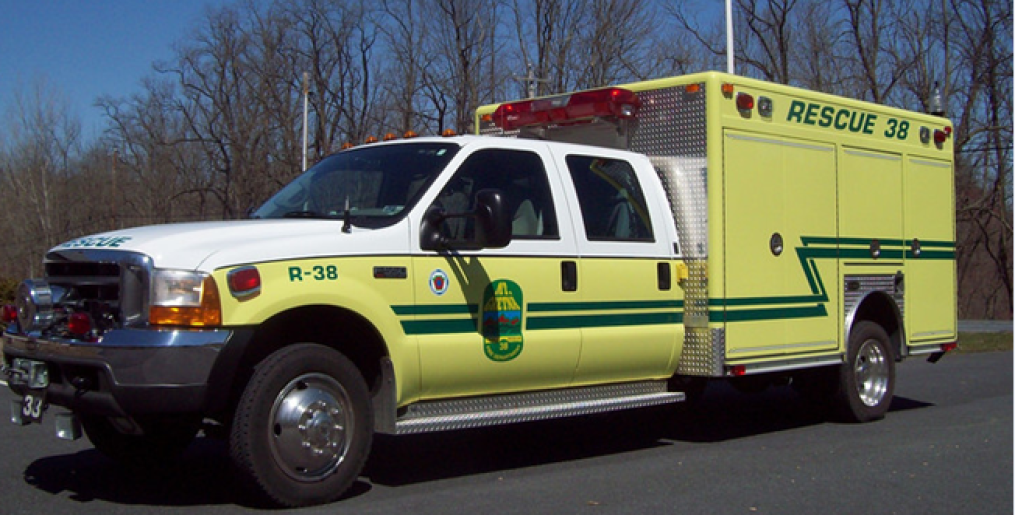 In 1899 one Mrs. Miller placed a kettle on her stove intending to boil water. Very soon the kerosene in the pot ignited Mt. Gretna’s first recorded conflagration. In addition to destroying or damaging 16 cottages in Campmeeting, that fire caused the only fatality (Mrs. Miller),an amazing record for a community of wooden cottages set in a dense forest. In May, 1922, a fire destroyed 6 cottages on Princeton Avenue and in November, 1949, a faulty chimney set off the largest fire in Mt. Gretna’s history. It destroyed an entire block in the Campmeeting, despite the combined efforts of more than a dozen fire companies. The unintentional “park” adjacent to the Tabernacle still memorializes the tragedy.

The local company was unprepared for the fire. Just a year before they replaced a WW 1 vintage solid-tired fire engine with a Jeep that carried a pump and ladders pulled a water tank on a trailer. This contraption was overwhelmed from the start. Among several smaller fires, one destroyed Terrance Hall, a residence for men in the Chautauqua in 1892, and another burned Woodcliff, a “ladies dormitory” in Chatuaqua owned by one Miss Mayflower Breeze (Really!) in 1925.

The Campmeeting fire company first occupied the tiny building at the corner of Pinch Road and Route 117, now the community library, and then moved to a smaller cinderblock building where the church parking lot is now. Until the company moved to their present location in 1953, onto land purchased from Jake and Blanch Stober, they had stashed fire hose and extinguishers in several sink holes around the community. Most of them were invaded by squirrels and other animals and so the hoses leaked and the extinguishers were rusted shut when they were needed. The company purchased ther first full-sized fire truck in 1965.

The Campmeeting and Borough Fire Companies merged in January 1978 and eventually filled the 5 bays of an expanded fire hall in “Stoberdale” with modern trucks and rescue vehicles. Crises continued to mark the history of Mt. Gretna and its new Fire Company. A fire in the Chatuaqua in the early 80’s dramatized the need for new water lines. Pipes acquired from the National Guard after they moved to Indian Town Gap in 1933 sent barely a trickle to the hydrants. Geysers erupted unexpectedly from the streets. Fireman Fred Klinefelter was fatally injured en route to a fire in 1982 when the fire truck he was riding in skidded off the icy highway. That accident caused, among other things, an urgent need for a new truck.

After all these years of painful but colorful evolution, Mt. Gretna now enjoys the privilege and security of having a modern fire company staffed by dedicated volunteers and as well-equipped as any professional company to handle all demands.

We the Mt. Gretna Fire Company would like to thank our wonderful community for supporting us through everything we do, without your support nothing would be possible. Thank you from our “Family” to yours. “Team Gretna”